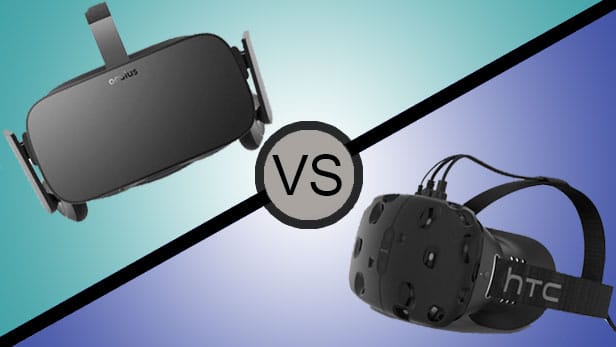 HTC Vive and Oculus Rift are two revolutionary VR devices in the virtual reality industry. Over a couple of years they have improved the devices in terms of specs, accessories and adding apps or games to the library. Let’s find out which headset is better; Oculus Rift vs HTC Vive, so that you can decide which VR device to buy.

The Oculus Rift and HTC Vive differ the most. While both are comfortable enough with face padding and are lightweight, but there’s definitely more heft to the Vive.

Rift’s advanced display technology is combined with its precise, low-latency constellation tracking system. It enables the sensation of presence, the feeling as though you’re actually there. The magic of presence changes everything. You will never experience immersion like this.

The Oculus Rift and HTC Vive both come outfitted with vibrant OLED displays. Each of the lens offers 1080×1200 pixel resolutions for each eye.

Combined they offer 2160×1200 resolution view at 90Hz refresh rates. This ensures the frame rate is enough to prevent motion sickness and provide a smooth experience.

The HTC Vive has a screen resolution of 2160×1200, which is the same as the Oculus Rift, but we like it better because it has a resolution which is brighter and sharper. The frame rate is 90hz. This brand also has a wider angle of 110 degree.

The Oculus Rift has brilliant and shiny colours, and the basic colours red, green, and blue are extremely flashy and luminous.

HTC Vive has a very authentic white colour. Other colours may be a bit dull, but overall the look is exceptionally real and three dimensional.

It uses an OLED screen which is the latest model for any VR headset.

In HTC Vive, an OLED screen is used, which is advance and futuristic.

Oculus Rift and HTC Vive both has a field of view of 110 degree. By this angle we can see 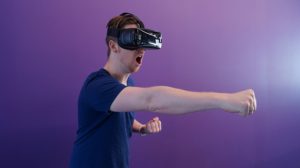 You can download the latest updates on the Oculus Rift and enhance your experience. You can also use the Rift with a number of accessories like the Oculus Touch, the Sensor, USB extensions and Mounting Brackets.

You can play all the up-to-date games on the HTC Vive, however some updates are not released up till yet which is slightly disappointing. But the games already on it are enough to keep anyone indulged.

Where as the Vive’s requirements are a little higher side and more in line with what the Oculus Rift requires for solid 90fps gameplay. You’ll need either a Nvidia GTX 1060 or AMD RX 480 along with an Intel i5-4590 or AMD FX 8350 processor, at least 4GB of RAM and Windows 7.1 or later.

The Oculus Rift is compatible with software which is available at Oculus Rift store, as well as supporting games through Steam.

HTC is providing wireless controllers designed specifically for Vive. The interactions feel intuitive and natural like an extension to your hand.

In March 2017, Oculus lowered the price of both the headset and controller bundle by slashing $200. But a complete HTC Vive set up will cost you around $800. Instead you can buy Oculus  Rift, Touch Controller bundle and also a tracking camera(for $80) and still you can save $300.

Oculus Touch is a pair of tracked controllers that give you “hand presence”. It takes interaction to the next level. Touch enables natural hand presence. It allows using your virtual hands.

It unlocks a social element that’s never been experienced in VR before. Touch controllers feature traditional action buttons, thumb-sticks and analog triggers that add familiarity to new experiences. These are your controls for grasping, lifting, and more. Oculus toybox allows to toss objects, light firecrackers, play ping-pong with other avatars – the world of interaction is infinite.

If you are beginner or have tight budget then we would recommend you to buy Oculus Rift. If you want more rich VR experience and access to more games then I would recommend HTC Vive. Let us know your about your choice when it comes to Oculus Rift vs HTC Vive.