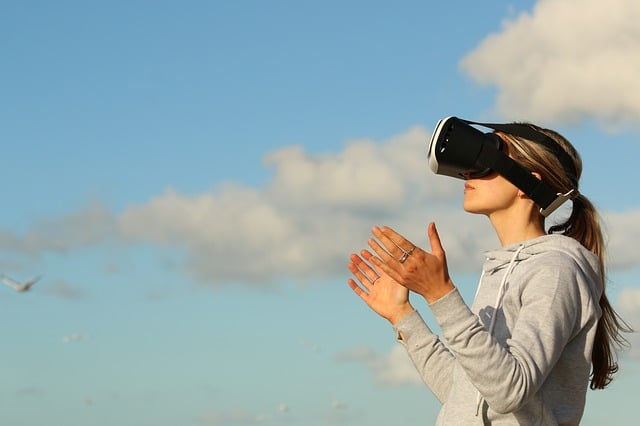 Till 2014 we were all stuck behind the glass. I mean the mobiles and computers, they are all screens. Everything we see is just confined to the dimensions of the display. In 2015 tech simulations we saw in Hollywood movies like Iron Man have become reality. Many new technologies like  Augmented Reality and 360° videos and 3D printing were introduced. Also a 360° immersive wearable technology called VR (Virtual Reality) has been introduced. We can experience virtual environment or videos or games by just putting on a device. We actually feel like as if we are in the same environment. Everything looks animated but you walk/run/fly/jump through the environment.

What is Virtual Reality?

The actual meaning of virtual reality comes naturally from the definitions of both ‘virtual’ and ‘reality’. The definition of ‘virtual’ is near and reality is what we experience as human beings. So the term ‘virtual reality’ basically means ‘near-reality.

Technically it is an artificial environment which is created by a hardware device and a software. This artificial environment looks and appears like 3D and we feel like we are in a 3D world. Virtual Reality is also known as virtual realities or immersive multimedia or computer simulated reality. It shows us peripheral vision. We actually turn our head instead moving a joy stick while playing a game.

To experience virtual reality we require a head mounted display (HMD) and special devices which receives input from the computer or smartphone. The most important element required for VR is the software to give a real world like experience. It includes 3D objects like buildings, landscapes, spacecraft, trees, human anatomy, sculptures, crime scene, solar system and many more.

At first Google introduced VR cardboards where we can place our smartphone and experience virtual reality with the help cardboard software. Now companies like Samsung, Sony, LG, Apple are into VR industry by introducing their own VR devices.

There are numerous ways virtual reality can be used. These include:
• Healthcare.
• Military.
• Architecture.
• Art.
• Entertainment.
• Education.
• Business.
• The media.
• Sports.

There is no other technology that we can actually experience something virtually, which is incredible. Virtual reality has the power to change the way we see, learn and experience simulated real world. Virtual Reality market may hit somewhere between $90 billion to $120 billion by 2020. Definitely virtual reality is going to be the next big thing.

So do you own any VR device or planning to buy one? This review may help you in finalizing your decision better, Oculus Rift vs HTC Vive.